July 18, 2017 – Gianmarco Raimondo, series rookie, hits a “home” run racing back in his native country of Canada after six years competing overseas in open wheel racing. This will have been his debut in the Ultra 94 Porsche GT3 Cup Challenge Canada by Yokohama.

Saturday brought great results for No. 76 Gianmarco Raimondo and teammate Patrick Dussault in the No. 77 car from Quebec’s GT Racing. Qualifying found 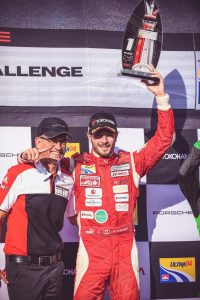 Raimondo P2 at 0.163 of a second off of the leading lap times of Roman De Angelis in the No. 78 Mark Motors entry who has an undefeated winning streak in the Gold category. This streak came to an unforeseen halt when Raimondo stole the show winning Race 1. Keeping in mind, this is Gianmarco’s first race in this series and on the Toronto street circuit.

Considering the disadvantages, Raimondo demonstrated the skill level that can only come from years of experience in the sport to overtake his main competitor on the start and keep him at bay throughout the entirety of the race.

“We had a great start.” He said “I have very little experience in rolling starts, this probably being my second or third rolling start in a car ever. We were fortunate to have it executed perfectly. This gave me the momentum to pass on the outside in the first corner and maintain the lead throughout every lap.”

With De Angelis close on his tail during the race, Raimondo displayed his expertise by outperforming the seasoned driver, positioning the car in the best way possible to defend the lead and keep a strong race pace. ” 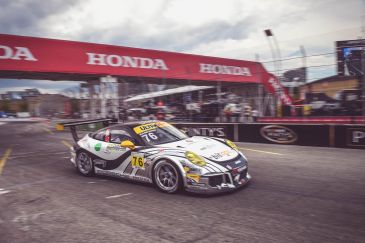 “All of the elements contributed to our victory.”He stated,” The amazing efforts GT Racing put into the preparation of the car made for a good fit to really perform at the best of my ability.”

At the end of the day, there couldn’t be a better way to debut Raimondo’s return to his home country than by achieving the top spot on the podium,ending the Porsche GT3’s Gold Class leader’s winning streak.

After a very intense battle in Race 2 on Sunday, Raimondo’s race ended early while pursuing Tim Sanderson’s No. 07 platinum category car for the majority of the race.

“I wanted to show that we had the pace to race with the platinum cars, but due to a lack of experience with tire degradation, I made a mistake in the most unforgiving corner by pushing a bit too hard over the bumps and suffering the consequences.”  Raimondo described Race 2 to have been challenging, “We kissed the wall and unfortunately could not continue due to the damages sustained on the rear right corner of the car.” 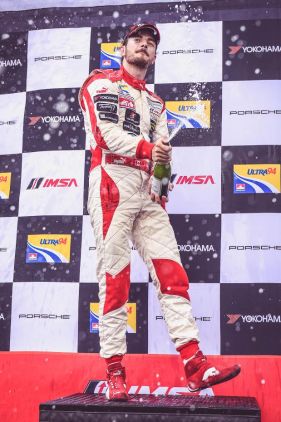 The Class leader, De Angelis, did not manage to finish the race either, due to mechanical issues. Therefore, the two ended up on the podium by default. The race ended in a yellow flag shortly after the mechanical, leaving both Gold category drivers to end up on the podium.

The races to conclude the 2017 season of the Ultra 94 Porsche GT3 Cup Challenge Canada by Yokohama series are the Grand Prix du Trois-Rivieres in Trois-Rivieres, Quebec, August 11-13 and the Canadian Tire Motorsport Park in Bowmanville, Ontario, September 1-3. Whether the series rookie, Gianmarco Raimondo, will be entering for either of these races has yet to be determined.

For more information, schedules and results, refer to:  http://porschegt3cupcanada.imsa.com.

Available photos are rights-free for editorial use without further authorization. High resolutions formats are available on demand.